The sensitivity of different detectors is not always reported equally in datasheets. Some use sensitivity in A/W, others may report a sensitivity of V/(lx s), and finally some report it as quantum efficiency. This makes it difficult to perform direct comparisons and to find the best suited detector. In this technical note, we provide guidelines for converting between the various ways to specify sensitivity.

Quantum efficiency is perhaps the simplest to explain. Light comes in the form of photons. The quantum efficiency states that for every photon coming in there’s a probability of X % that the photon will generate an electron that is measured by the detector. If a detector has a quantum efficiency of 60%, and 100 photons are impinging on its surface then the detector will count on average 60 electrons. The remaining 40 are lost.

The exact quantum efficiency is typically different for different wavelengths. The following plot shows an example for a typical silicon CCD detector, S11156-2048-02: 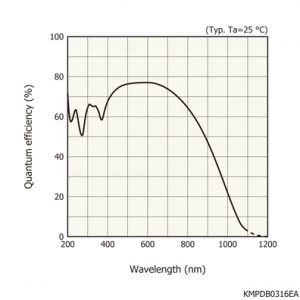 To determine how fast a detector reaches its full output signal one has to look at the full well capacity. For some detectors, this value would be e.g. 200ke-. If 100 electrons are impinging on the detector every millisecond, and on average 40 of those are lost, then the detector gains 60 electrons every millisecond. In this case, it would take 3300ms, or 3.3s to reach full detector saturation, or what is normally shown as an output of 65535 counts (16 bits).

Shown here is the photosensitivity of S11639-01, a CMOS detector often used in similar applications as the CCD detector shown previously. It would be preferable to be able to compare these two directly, but this is not possible because the axis units are different. 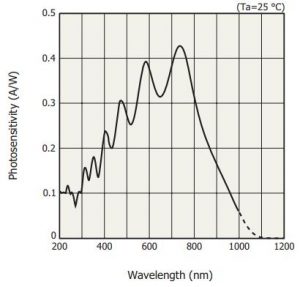 To calculate the QE it is necessary to use some basic physical relations:

Starting with the ideal case, it is necessary to calculate the number of photons per watt for a given wavelength. For comparison’s sake, we can use 400 nm and 600 nm. The photon energy is given by Planck’s constant, h, the speed of light, c, and the wavelength, λ:

Thus, under ideal conditions where the quantum efficiency is 100% the current per watt is:

From the plot, it can be seen that the sensitivity at 400nm is 0.23 A/W, and at 600nm it is 0.38 A/W. By dividing the value from the graph with the ideal value calculated previously we obtain a ratio. This ratio is equivalent to the quantum efficiency:

Now that the equations are in place it is possible to make a direct comparison of the quantum efficiency of the back-thinned CCD detector, and the S11639-01 CMOS detector. From the plot it is evident that the photosensitivity in A/W (blue line) makes the detector look vastly inferior to the CCD detector (green line) at all wavelengths – even if these numbers are not directly comparable.

But when converting the photosensitivity to quantum efficiency (red line) the CMOS appears to be substantially similar to the CCD, albeit with a ripple modulation on top. This underlines the importance of comparing apples to apples. 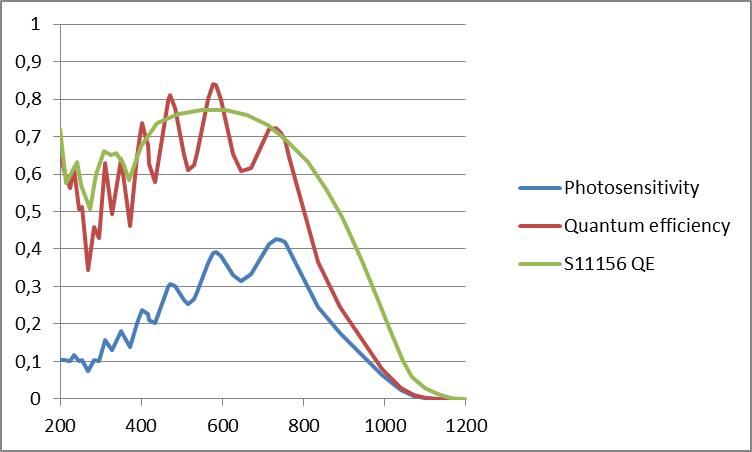 Conversion to and from sensitivity expressed in V/(lx s) is not trivial. The reason is that lux, lumens per m2, is a unit that is modulated with the human eye’s photoresponse. This is expressed as the photopic luminous efficacy, i.e. the sensitivity of the cones: 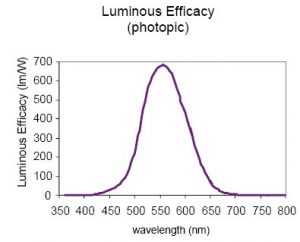 But the big problem is that normally this curve does not match that of the detector quantum efficiency. Luminous efficiency is effectively 0 at both 400nm and at 750nm, yet the quantum efficiency for S11639-01 at both these wavelengths is approximately 72% – despite having a sensitivity stated in V/(lx s). Consequently, one can only trust the sensitivity provided in V/(lx s) at the single wavelength for which it provided.