This guide lists some of the key things you should consider if you are going to design a Raman Instrument. If you want to learn more about the basics of Raman Spectroscopy you can visit our Raman technology page.

First of all, the parts you will need for Raman instrumentation are:

In the following, we will describe options for each item in more detail. 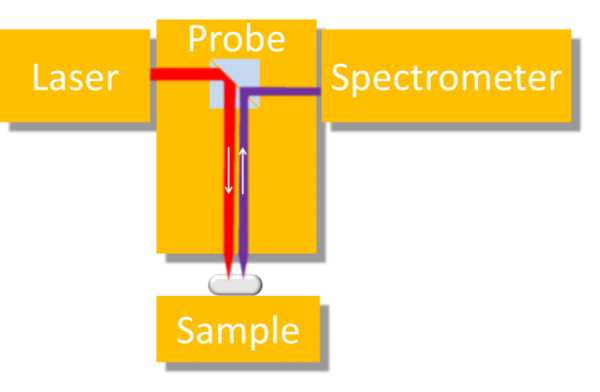 Raman spectra are characterized by two traits. The peaks are sharp and often closely spaced and the signal level is very low. For this reason, a typical spectrometer for Raman spectroscopy should exhibit high resolution and high sensitivity. High resolution typically means sub-nanometer resolution and is normally obtained by using a narrow slit at the entrance to the spectrometer. However, a narrow slit also means low sensitivity, so you should always consider using a spectrometer with the numerically highest resolution you can live with and still get good spectral results.

As mentioned above, the slit width of the spectrometer is generally quite narrow in order to obtain a good resolution. However, the sensitivity of the spectrometer can be increased by using a tall slit opening (often several mm’s) and a detector with just as tall pixels (or a 2D detector array).

Since detectors used for spectroscopy are integration-type detectors you can increase the signal level of your Raman spectrum by integrating over a long time. It is not uncommon to integrate for more than 1 second. Unfortunately, the dark charge of a detector also increases with integration time, and worst case you could saturate the detector with the dark charge alone leaving no dynamic range for your real signal. The way to solve this is to cool the detector chip since the dark charge build-up is proportional to the temperature. For high-end Raman Instrumentation, the detector might be cooled to -60 degrees C whereas mid-range instruments might only be cooled to -10 degrees C. For handheld instruments that often have to be battery operated, you want to avoid cooling because it consumes a lot of power. This means that integration times for handheld devices are often limited to less than 1 sec.

The key parameters for the laser are the laser wavelength and the optical output of the laser. Raman is a vibrational spectroscopic technique and you can basically use any laser wavelength to change the vibrational states of the molecules of your sample material. There are, however, several factors that influence your choice of laser wavelength and you will likely have to make some compromises. All materials exhibit Raleigh-scattering which creates a baseline level in your Raman spectrum that can be larger than your Raman signal and thereby make it difficult to detect your Raman signal. Since Rayleigh scattering is proportional to 1/ λ4, you would get the lowest scattering by choosing a long laser wavelength. Unfortunately, many materials exhibit fluorescence at a longer wavelength, and the fluorescence will also create a background level that can mask out your Raman peaks. A further complication with wavelengths above 1100 nm is that you have to use special detectors made from for instance InGaAs which is generally much more expensive than Silicon detectors that can be used up to 1100 nm.

The most popular laser wavelength for Raman is 785 nm because it is a good compromise between scattering and fluorescence for most materials. Also, with 785 nm as your laser wavelength, you can cover up to 3650 cm-1 (1100 nm) of Raman shift and still use a silicon CCD detector. Other common wavelengths used are 532 nm, 830 nm, and 1060 nm.

Your choice of laser power mainly depends on your cost target and the damage threshold of your sample. Obviously, the higher the output power you need the higher the cost of the laser.  Also, if your optical power density on the sample becomes too high you may damage or change your sample which is undesirable. As an example, if you are measuring on human skin, for instance, you don’t want to burn the patient.

The probe can be either based on multi-mode fibers or free space optical components.

The benefit of free space optics is that it is the lowest loss option. Lenses with good AR coatings can often transmit up to 99% of your light which means that you only lose a few percent of your precious Raman photons in the probe optics. On the other hand, free space optics requires very precise alignment of the various elements and with the spectrometer. Also, if you are using a tall slit in your spectrometer you would want to include extra optics to convert from your circular laser spot on the sample to a line at the entrance to the spectrometer.

The main benefit of using fiber optics is that it relaxes the need for accurate alignment. If you are using a tall slit you can even use a fiber bundle cable where the fibers are arranged in a circle towards your sample and along a line matching the slit dimension towards the spectrometer. Fiber optics, however, has the main drawback that it is lossy. You can lose up to 50 % of your Raman signal by going through the fiber(s).