Influence of Polarization on Fringe Visibility

TE and TM polarization modes defined, and requirements for interference

This section shortly describes the difference between TE and TM polarized light.

Definition of TE and TM polarizations

Figure 1 illustrates TE and TM polarization respectively of the light incident upon a Phase mask. The figure shows a +/-1 order Phase mask and its grating vector, which is perpendicular to the grating plane, and the incident light, which here is at normal incidence (Θ1=0) . The plane of incidence is the plane defined by the grating vector and the propagation vector of the incident light.

The light’s electromagnetic properties are defined by the orientation of its electric and magnetic fields. TE (Transverse Electric) polarized light is characterized by its electric field being perpendicular to the plane of incidence. For TE light, the magnetic field – always perpendicular to the electric field in isotropic materials – is parallel to the plane of incidence.

The importance of the polarization characteristics is that only parallel oriented polarization modes interfere, and it is the interference between the +1 and -1 orders of the Phase mask that generates the grating in the fiber/waveguide.

As seen in figure 2, the polarization vectors of the 2 diffracted orders are parallel in the TE case. Hence the fringe visibility will be 100% (assuming full coherence of the light source). 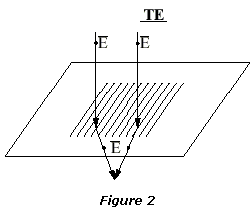 As seen in figure 3, for TM polarized light, the polarization vectors of the 2 diffracted orders are not parallel as in the TE case. Instead, there is an angle between them. This results in a fringe visibility that is less than 100%, as the degree of coherence now is less than 100%. 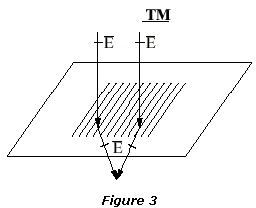 The degree of coherence of the TM light is given by the interference angle between the two diffracted +/-1 orders. This angle is found from the grating equation:

where λ is the illumination wavelength, Λ is the center pitch of the Phase mask, Θi is the incidence angle and Θm is the angle of diffraction for each order m that satisfies the grating equation. At normal incidence (Θi=0), the diffracted angle will be:

The fringe visibility of TM polarized light is therefore cos2(2·Θm).

The fringe visibility of unpolarized illumination can be evaluated as an average of the TE contribution and the TM contribution. The example below illustrates this evaluation, which is a typical example when writing FBGs for 1550 nm applications using an excimer laser at 248 nm:

As seen in the above example, the evaluation leads us to conclude that when a Phase mask is used with unpolarized illumination, the fringe visibility will be affected negatively. Whether the evaluated fringe visibility is sufficient, must be decided depending on the specific application.

Do you want to discuss your grating project over the phone? Please fill out the below form, and we will contact you.

Get in contact with our technical specialists about your product, technical, or support questions at the below e-mail. Inquiry@ibsen.com