The effect of cooling CCD detectors for spectroscopy

The main reason to cool a detector in a spectrometer is to reduce the dark current and thereby:

To benefit from cooling the detector performance must be limited by the dark current. In practice this means:

Several detectors on Ibsen spectrometers can be equipped with thermoelectric (TE) cooling. Though this can have clear advantages for measuring low intensity signals, these detectors are costly and the cooling stage is bulky. It is therefore important to be able to decide what advantage the cooling offers for a specific application. The purpose of this document is to provide some real numbers that can help decide when cooling is advantageous for an application.

We discuss the temperature dependence of the dark level and dark noise of the commonly used Hamamatsu S7031-1007S back-thinned CCD detector that is read-out using a 16 bit AD converter on a dedicated electronics board [1]. The detector is mounted to a spectrometer however, as we pass no light into the spectrometer the tests we perform can be considered tests of the detector and electronics only.

The readout of a non-illuminated detector is not giving 0 counts. Instead there is some fixed lowest value that is measured even under completely dark conditions. This is called the dark level, and it should not be confused with the dark noise (see the next section). The dark level can be different per pixel and depends on the temperature, integration time of the detector and the electronics that reads out the detector and converts it to a digital value. Therefore, even if you have the specifications of the detector at hand it will be difficult to determine in advance what dark level to expect and what the noise on this dark level (the dark noise) will be. The dark level is determined by: 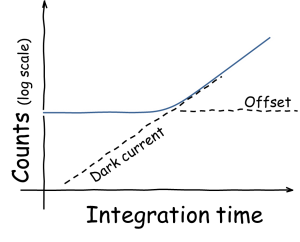 Figure 1, a sketch of the dark level (on a logarithmic scale) for different integration times.

The measured dark level on the S7031 is shown in Figure 2. To obtain these results 100 measurements at different temperatures between -10 °C and 20 °C and integration times between 1 ms and 20 seconds were taken. Of each series the average signal over 792 of the 1024 pixels was calculated [2]. The results show that the dark level is basically constant near 1000 counts up to integration times of 50 ms. This is the regime where the dark current is so minimal that it does not contribute to the dark level. At longer integration times the dark current becomes important and thus also the need for cooling. In the most extreme case integrating for 20 seconds the dark current at room temperature (20 °C) is saturating the full range of the 16 bit AD conversion, making it impossible to do any useful measurement. Cooling the detector to -10 °C reduces the dark level to below 3000 counts, making it possible to also detect a signal.

Together these contribute to the noise via the following relationship:

For our current measurements without any light the noise of the signal can be ignored. To investigate the noise, the same measured set as presented in Figure 2 was used to obtain the noise. For this the per-pixel standard deviation was calculated (see inset of Figure 3) and the average of this over 792 pixels is plotted in Figure 3 [2]. It can be seen that up to 10 ms cooling has very little effect on the noise as it is dominated by the readout noise. However, for long integration times the noise can be significantly reduced by cooling to -10 °C. 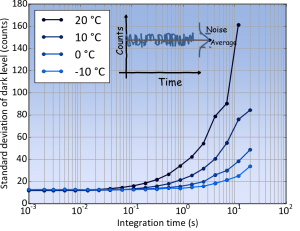 Apart from the above noise sources that apply to every pixel separate there is also a fixed-pattern noise. This noise is the pixel-to-pixel variation in for instance sensitivity, and is thus rather constant in time: it will reproduce for measurements taken under the same conditions. The pixel-to-pixel variation in CMOS detectors for instance originates from the fact that each pixels has its own amplifier. Small variation in these amplifiers naturally leads to a characteristic fixed patter noise that can even be used to fingerprint cameras. Since this noise is stable over time it does not contribute to the time dependent noise we discuss in this document.

The effect on temperature on dark level and dark noise in the end also comes back in the dynamic range that can be achieved with the detector. The dynamic range for 16 bit AD conversion we define as:

Its dependence on integration time and temperature is shown in Figure 4. For integration times of 1 second the dynamic range can be more than doubled by cooling the detector. This enables significant improvement in practical measurements. 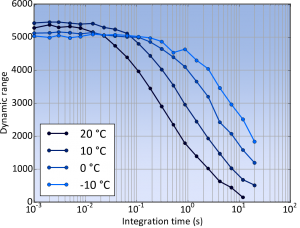 It should be noted that the sensitivity or quantum efficiency of detectors is also dependent on the temperature. Especially in the infrared the sensitivity decreases with lowering the temperature. The reason for this is that a thermally excited population of electrons is more easily excited above the bandgap. Especially for low energy infra-red photons the fact that the electrons are already excited helps in obtaining signal. It is therefore possible that while the dark level decreases also the signal level decreases. For the Hamamatsu S7031 detector this is not specified in the spec sheet [3] though it is mentioned. It can be found in Hamamatsu’s general image sensor handbook [4] where it is shown that at 900 nm the sensitivity coefficient is about 0.2 %/°C.

From the above measurements it can be concluded that the turn-over point for using cooling lies when integration times are approaching 0.1 to 1 second. For a real implementation it is always wise to test the spectrometer under the normal working conditions with different temperatures and analyze the SNR that is obtained in similar ways to which this was done in this document.

In summary, we have made a measurement of the temperature dependence of the dark level and noise of a cooled Hamamatsu S7031 detector. The choice for a cooled or non-cooled detector for your application depends on the following:

Table: Specifications of the used detector